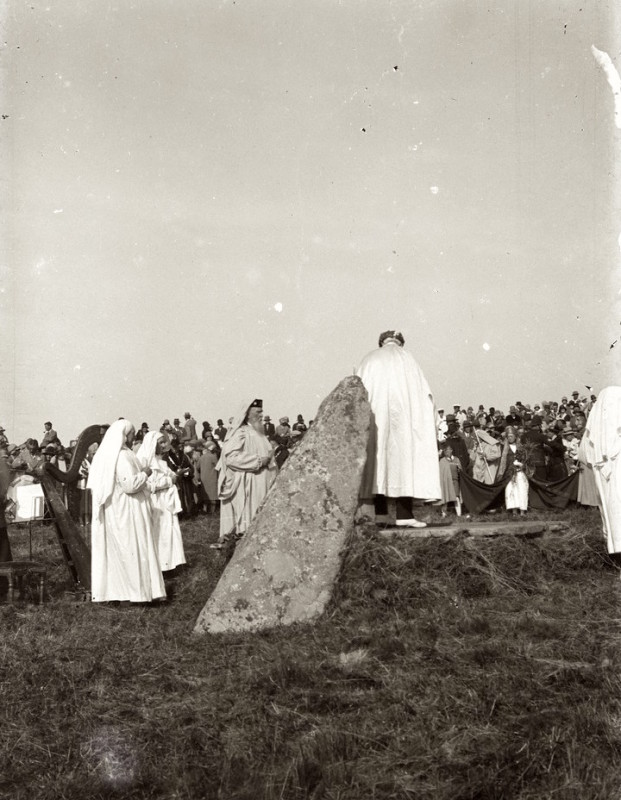 The first Gorsedh Kernow in 1928 with Grand Bard, Henry Jenner

The Morrab Library has been awarded a grant of £3000 from Cornwall Heritage Trust to digitise an important collection of photographs relating to the archaeology of Cornwall.

The Stanley Opie collection consists of 1,001 glass negatives, covering topics such as the first Cornish Gorsedd in 1928 at Boscawen-ûn, standing stones, excavations, buildings, crosses, settlements, historic landscapes and more. They are, on the whole, beautifully taken photographs which deserve to be seen.

The grant will allow the Library to place its Photographic Archive database online, along with access copies of all photos scanned to date. The Stanley Opie negatives will then be scanned, placed into conservation grade four-flap envelopes, boxed, and finally placed online as a dedicated collection for all to see.

Stanley Opie was born in 1912 and took up photography, and gained a passion for archaeology, at quite an early age. He gained a diploma in Anthropology from the University of Oxford and took part in many archaeological excavations during the 1930s to 1950s. Some of his photographs depict the excavation of a Roman villa at Magor Farm near Camborne, others are of excavations and sites yet to be identified.

It is hoped that by publishing Stanley’s photographs online that we may improve their descriptions and identify excavations and sites through comments and suggestions received through the website.

The Morrab Library is grateful to Cornwall Heritage Trust for their generous support.