Book Review – The Loss of the S.S. Trevessa 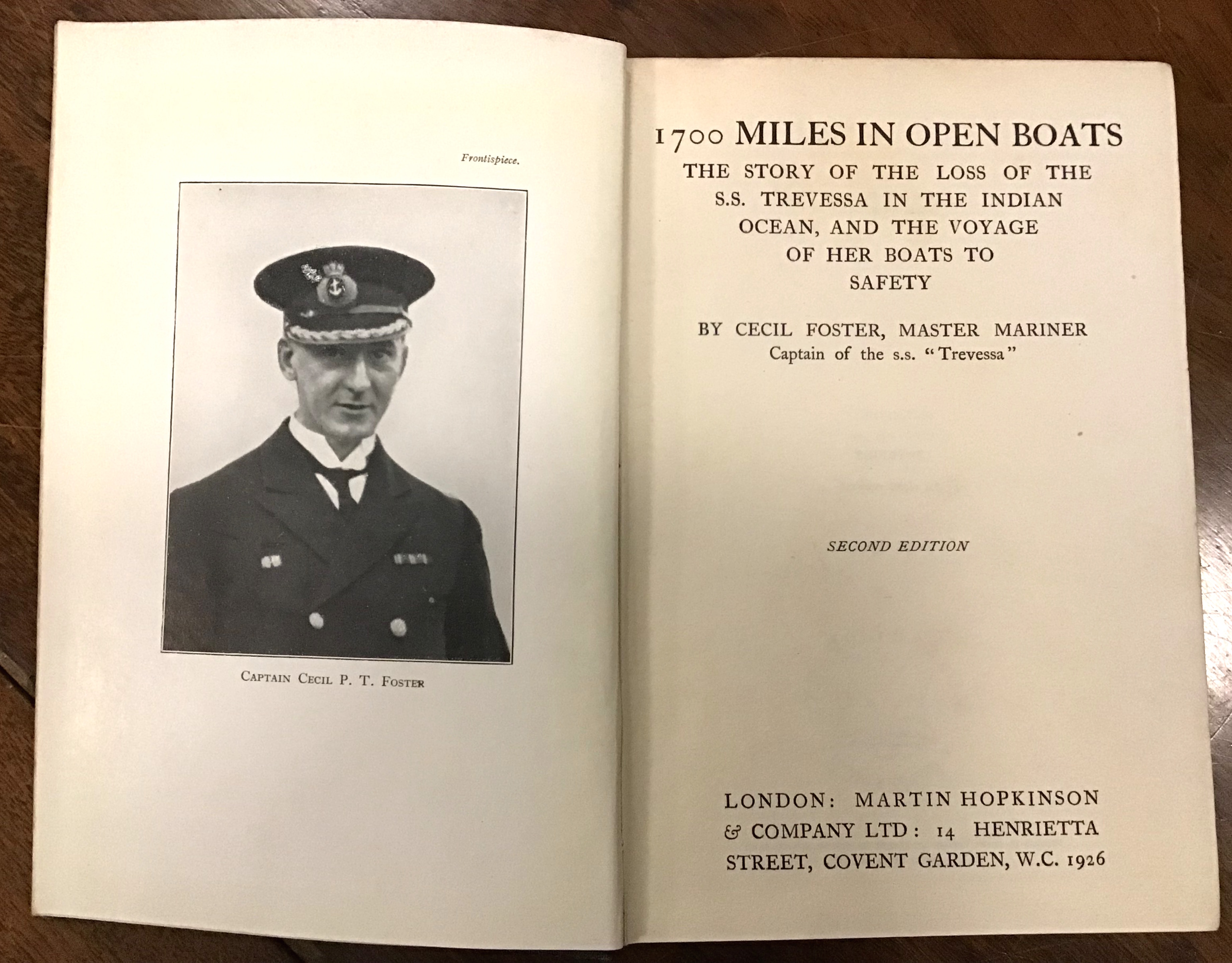 Glancing through the shelves in the Jenner Room I came across a book with the title on the spine, THE LOSS OF THE TREVESSA. On opening the book I found that the title page read ‘1700 miles in open boats.’ The book was written by Cecil Foster, Captain of the ss. ‘Trevessa.’ It was originally published in 1924 and this was the second edition of 1926.

The ‘Trevessa’ was a steamer belonging to the Hain Steamship Co. of St.Ives. She was originally a German vessel named Inkenturm and built in 1909. During the 1914-18 War she was interned in the Dutch East Indies and eventually taken over by the British Government and sold to the Hain Line in 1920. Her gross tonnage was 5000 tons. The ships of the Hain Line were named after houses and farms in Cornwall. They would be known as bulk carriers today and went all over the world, picking up cargoes and carrying them from port to port across the great oceans. By the time she left Freemantle, Western Australia, on her final voyage on he 25th May 1923 she had already sailed from Liverpool to Canada, then to the USA and then, via the Panama Canal to New Zealand and Australia.

She had a cargo of zinc concentrates which should not have been a hazardous cargo had it been loaded properly.   The Lloyds Register surveyor at the port supervised the loading and he was satisfied enough to certify that the ship was correctly loaded.

Sailing across the Indian Ocean the ship was on a course towards Durban, South Africa, but on the night of June 3rd, in very stormy weather, it was found that the ship was taking water so seriously that there was no chance that it would remain afloat. After the radio operator had given the ship’s position in the hope that other vessels would come to her rescue, the crew of 44 successfully took to two lifeboats with only oars and a sail for propulsion.The ship sank 1640 miles out from Freemantle and the nearest land which was reachable with the prevailing winds was about 1700 miles to the west. These were islands, the largest of which was Mauritius but small enough to miss with only the sun and stars to navigate by. Rather than attempt to remain in the vicinity of the sinking and chance the unlikely event of a ship finding them before their supplies of water and food ran out it was decided to make for the islands. In any event they were at the mercy of the winds and the currents, and it would have been impossible to have held the two lifeboats close to where the Trevessa sank.

It was fortunate that both Captain Cecil Foster in charge of No. 1 lifeboat and First Officer James Smith was in charge of No. 3 lifeboat were men were of that generation of master mariners who were familiar with sail. Having a wide experience of sailing in all parts of the world they have known the winds and currents of the Indian Ocean. So much depended on the captain and the first officer to maintain discipline in the two very crowded boats, and strict rationing of water, milk and biscuits was enforced. Thirst was the great enemy and there were cases where men succumbed to the temptation of drinking sea water resulting in greater thirst and in one case led to death.

For navigation they depended on the sun and the stars, and it was remarkable that they were able to navigate with some sense of direction. They were without a useful compass and they had no chronometers, both of which are essential for steering and establishing the position of a vessel and the rate of progress. In the beginning the two lifeboats kept together but there were difficulties in keeping together as the captain’s boat was faster than than that of the first officer. They agreed to separate so that the first to reach land could summon help for the other boat.

It was remarkable that strict discipline was kept in such crowded boats with men close to despair. For much of the ordeal they were encouraged by the hope of rescue or of reaching land. They did capture rainwater which provided welcome relief from thirst but not all of it was drinkable since receptacles were contaminated by sea water .

They spent about three weeks in the lifeboats, very cramped and hardly able to move and all suffered from lack of exercise and, most of all, water and food. The rationing was so strict  that they ended up with supplies they did not use but the length of the ordeal could not have been predicted. Eleven lives were lost, two in the captain’s boat and nine in that of the first officer. These were all due to the conditions suffered by those in the boats except for one instance when a man was accidently lost overboard.

The captain’s boat arrived at Rodriguez Island, part of the Mauritius group and the first officer’s boat arrived at Mauritius itself. No.1 boat had travelled 1556 miles and No. 3 boat 1747 miles. It was quite a long time before the men were able to eat any quantity of food and several were treated in hospital on the islands.

The book is very readable and the text is punctuated by extracts from the logs of the two boats.The captain was very much a man of his time in seeing the superiority of the white races over the ‘coloured’ as represented by the 13 in the lifeboats who were not European. At the same time the captain said that he could not have wished for a better crew and all did what they could to try to ensure the survival of each one of them. With a chart at the back of the book, the progress of the voyage can be easily seen. The book could have done with a glossary of  nautical terms since the language of the sea cannot always be understood by ‘landlubbers.’ The incident, though well known at the time and now largely forgotten, deserves to be remembered today and ranks with such long open boat voyages as that of Captain Bligh, cast off from the ‘Bounty,’ and Mary Bryant, who escaped from Botany Bay. One can also add Shackleton’s 800 mile journey in 1914 an open boat in the Antarctic after the sinking of HMS Endurance .

The book ends with a summary of the conclusions of the Court of Enquiry into the sinking of the ‘Trevessa’ and there was criticism of the way the ship was loaded and one feels that the excuse ‘that this manner of loading has been general use for many years’ was not good enough. There was no satisfactory explanation as to why plates opened up in severe weather to admit a rush of water to cause the ship to sink.Were the repairs to those rivets in the hull seen to be defective before the ship left adequate?  It is highly unlikely that the wreck, lying at the bottom of the Indian Ocean, will ever be examined by divers which could be the only way to discover answers to these questions. 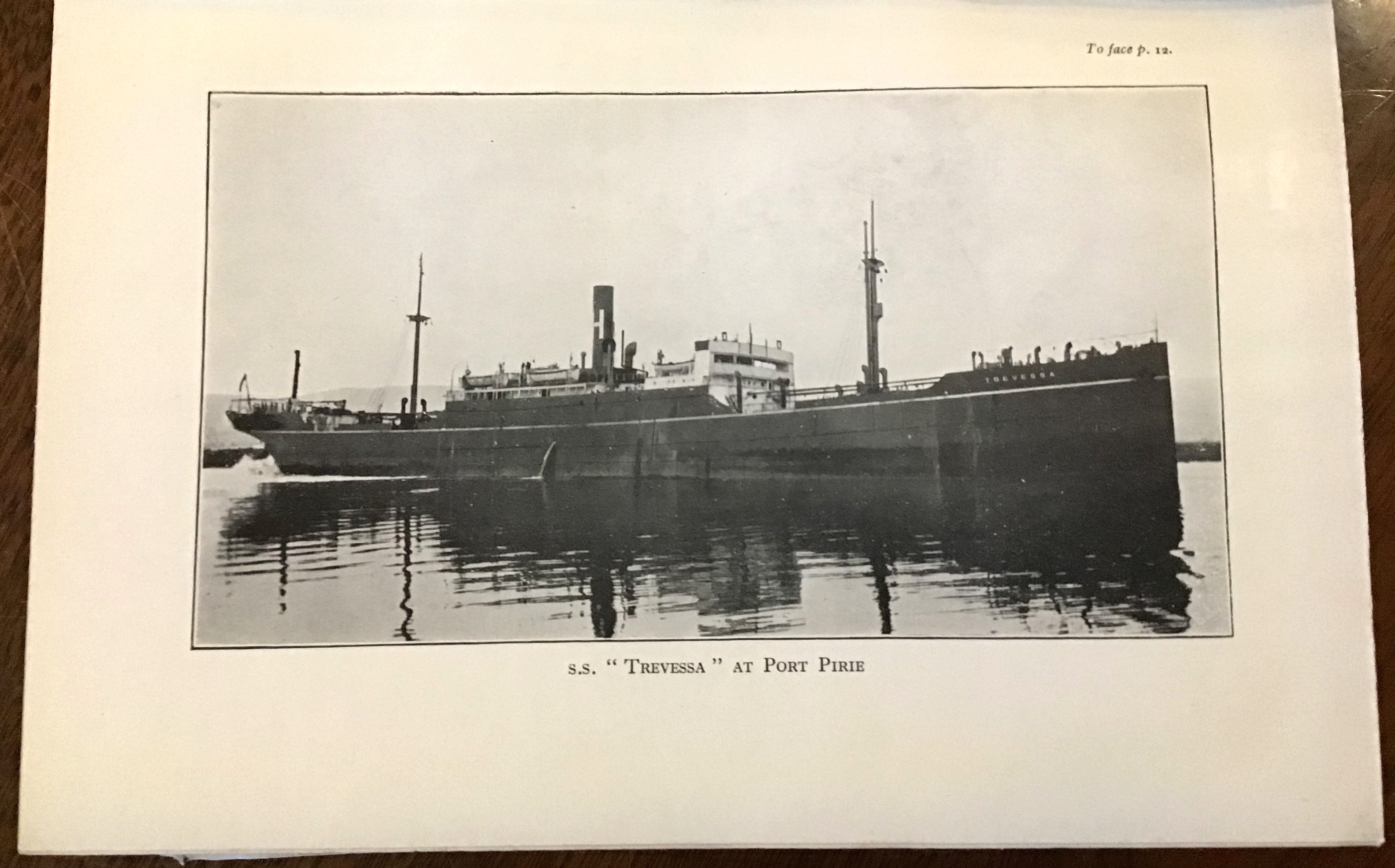