Alison Meaton is a Penwith resident, a retired primary school teacher, a Quaker and part of Extinction Rebellion West Cornwall. She is also a new member of Morrab Library. In late October 2021 she travelled up to Glasgow for COP26 to be part of the surge of people bearing witness to the climate emergency.

We contacted Alison as we felt that the voice of a Penwith resident on the ground at COP26 would be an invaluable addition to the Penwith Futures Book project. As Alison journeyed north, and during her time on the ground in Glasgow, she kindly shared daily photos and diary entries with us to paint a picture of how it felt to be part of this pivotal moment in history.

Alison will be contributing to the Penwith Futures Book which you will be able to read in a year’s time. In the meantime, we thought we would share excerpts from her daily thoughts live from COP26. Perhaps they might inspire you to reflect upon COP26 and the changes you hope to see here in Penwith. And to think about your ideas for the future and get creative in your entries to the Penwith Futures Book. 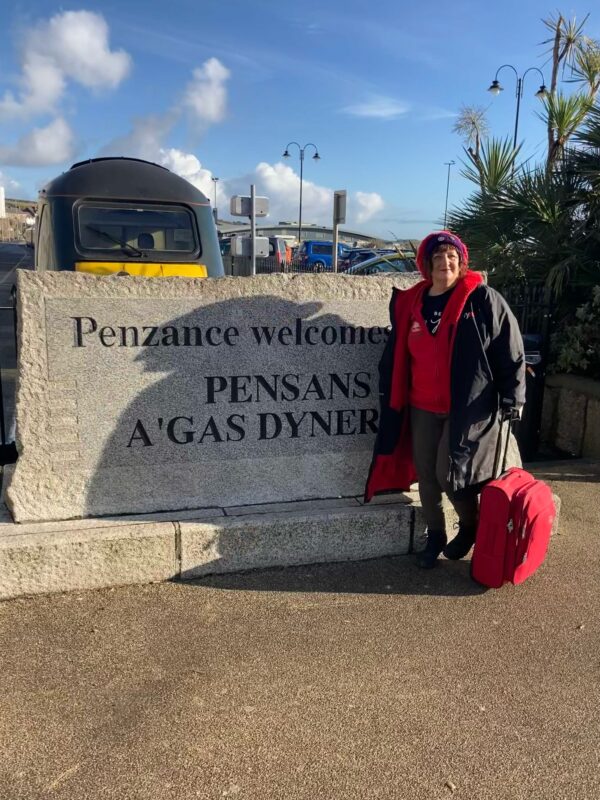 “I am embarking on a 560-mile train journey to Glasgow with my case crammed full of banners, flags and thermals. Leaving balmy Penzance, dressed for comfort rather than style, I am overheating. Glasgow is significantly colder and I’ve been advised to prepare for wet weather. On the train my phone is constantly showing new messages with requests for people to join marches, prayer vigils, actions and visit art events. This feels like a holiday but I know there is a serious purpose. I am going to COP26 to bear witness to the climate emergency. I am driven to be there to show the world leaders and decision makers that individuals, the worker ants, demand real action with commitments to limit global temperature rise to 1.5°C. They are accountable to us and our future generations.” 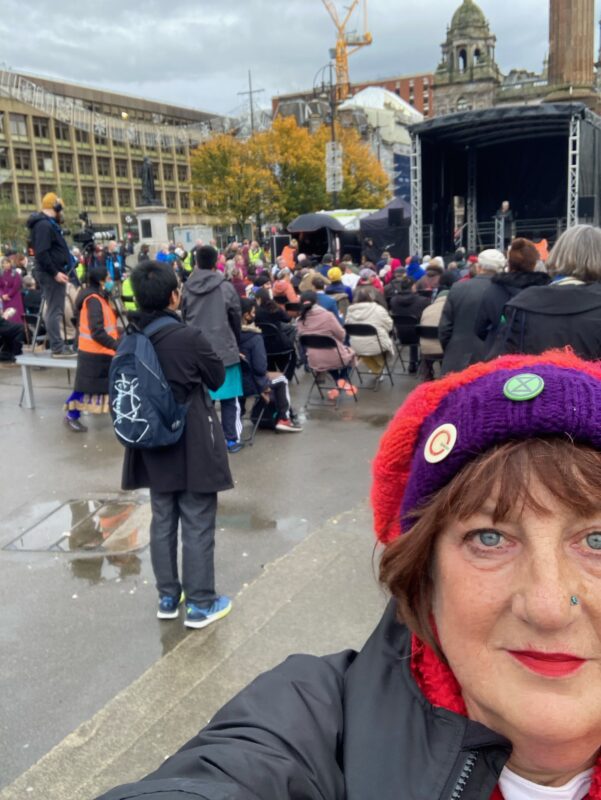 “I walk on the pedestrianised grid of streets orientating myself in this unknown city. I notice a few activists, recognisable by their rucksacks and badges. There is a large interfaith vigil with representatives leading prayers and meditations for those making decisions at COP26.

Glasgow Quaker Meeting House is providing a space to mentally and physically replenish oneself. I join a FWCC (Friends World Committee for Consultation) event hosted by Quakers in Glasgow.

Quakers from around the world share what is happening in their countries with the climate emergency and their hopes for the future. The Quaker from the Philippines speaks of the need for the world leaders at COP26 to listen to the scientists, to follow the science and stop blaming individuals, rather than the fossil fuel companies, for the dangerous position the earth is in.

I stay for the early evening reflection which steadies and calms my thoughts.” 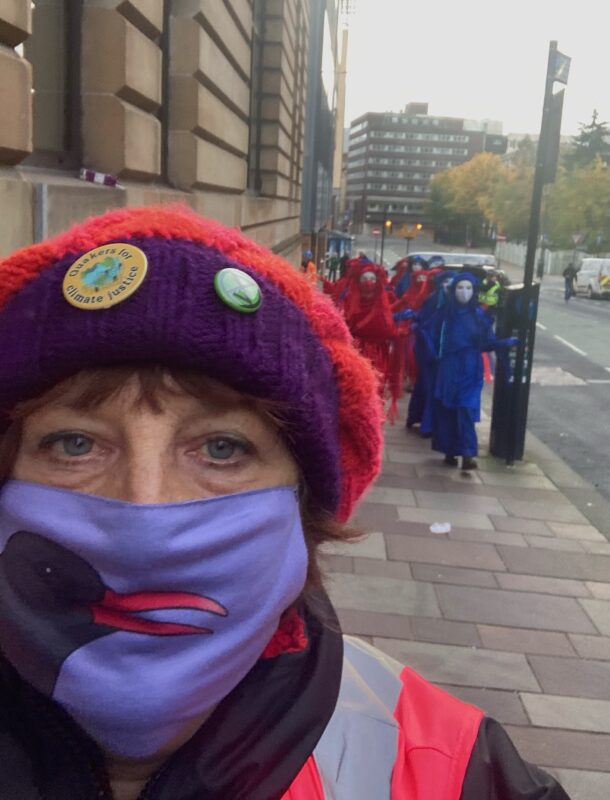 “The Red Rebels are arriving. These enigmatic figures appear without warning, moving silently among humanity.

“Red Rebel Brigade symbolises the common blood we share with all species,
That unifies us and makes us one.
As such we move as one, act as one and more importantly feel as one.
We are unity and we empathise with our surroundings, we are forgiving
We are sympathetic and humble, compassionate and understanding,
We divert, distract, delight and inspire the people who watch us,
We illuminate the magic realm beneath the surface of all things and we invite people to enter in, we make a bubble and calm the storm, we are peace in the midst of war.
We are who the people have forgotten to be!”

I am asked to help steward to keep performers safe and to ensure clear pathways for the public when in crowded places. We walk to a meeting point and the Red Rebels, accompanied by the Scottish Blue Rebels, glide out onto the pavement. Slowly, with purpose, the Red and Blue figures advance along the pavements, looking neither left or right accompanied by a single drummer. They advance with the stewards skittering around them to clear pathways, halt traffic and reassure police

Somehow the media is awakened and camera crews appear eager to film and photograph the Red and Blue tableau as they reach Glasgow Central station. Without warning the figures regroup and glide to a new resting place. And move again. Like a restless but slow-moving sloth. All the while the insistent rhythm of the drum sounds throughout the building. 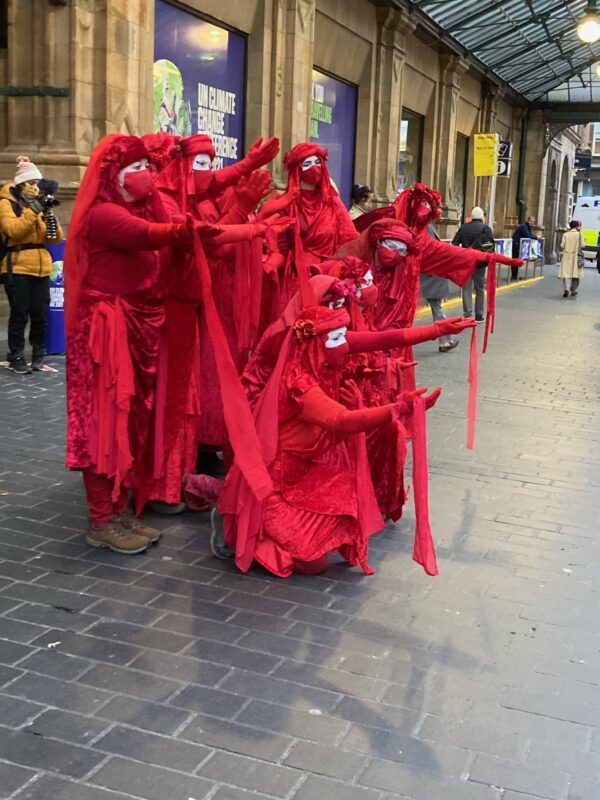 At a signal we stewards are sent off to meet the Euston train. Emerging from the crowd of travellers is a second group of Red Rebels making their stately way to the main concourse. We scurry ahead to clear a path and the 2 groups meet, create new arrangements and then without a sound turn and retrace their steps out of the station. 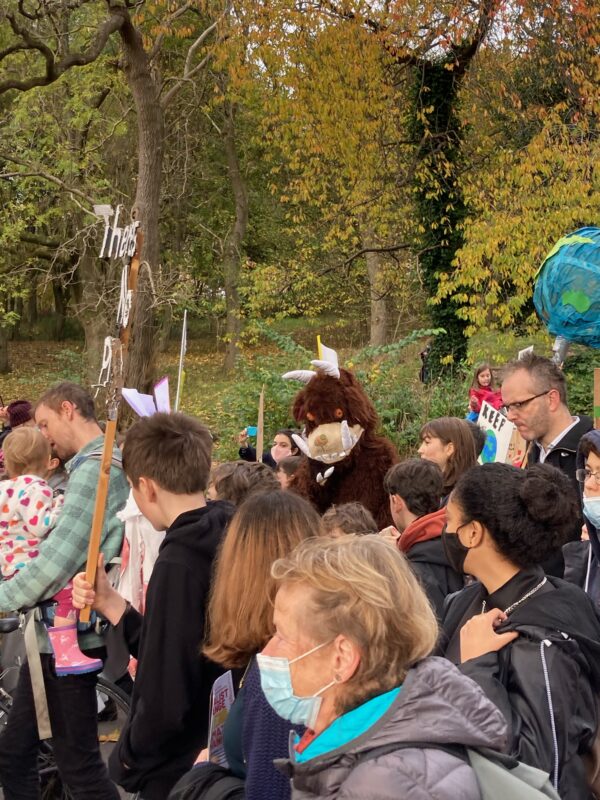 “This is the young adults and children’s march Fridays For Future and Extinction Rebellion are there to support them.

Three of us take the subway to the centre of Glasgow. We are met by the stage manager who needs three people to stand by the barriers to monitor who is coming in and out of the backstage area.

Delegates begin to arrive. I am not briefed on who is allowed in but a helpful Spanish speaking steward from another activist group works with me. I defer to him as it is a Fridays For Future event, not Extinction Rebellion. Another steward joins us and we share biscuits and climate activism stories. We muddle through with a lovely Glaswegian man who came to find out what the fuss was about and ended up staying for the whole event, moving the metal fence open and shut as needed.

We hear the march arriving before we see anyone. The samba band is playing, rhythms that enthuse, inspire, call to the soul. A sea of flags and placards advances and the square fills. Climate activists from around the world including, Ayidha Saddiqa, Chris Mitchel, Mikaela Loach, Sofia Gutierrez, Vanessa Nakate and Greta Thunberg speak calling on global governments to commit to real climate action. And then it is over. Greta Thunberg is whisked away and I say goodbye to my new friends; the Glaswegian, the Spanish speaking steward and the student from Preston who travelled up for the day to join the march.” 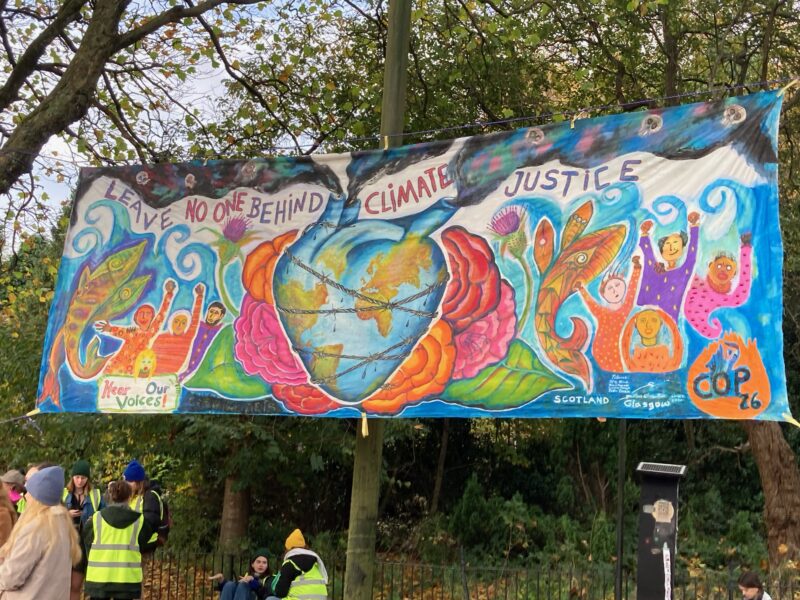