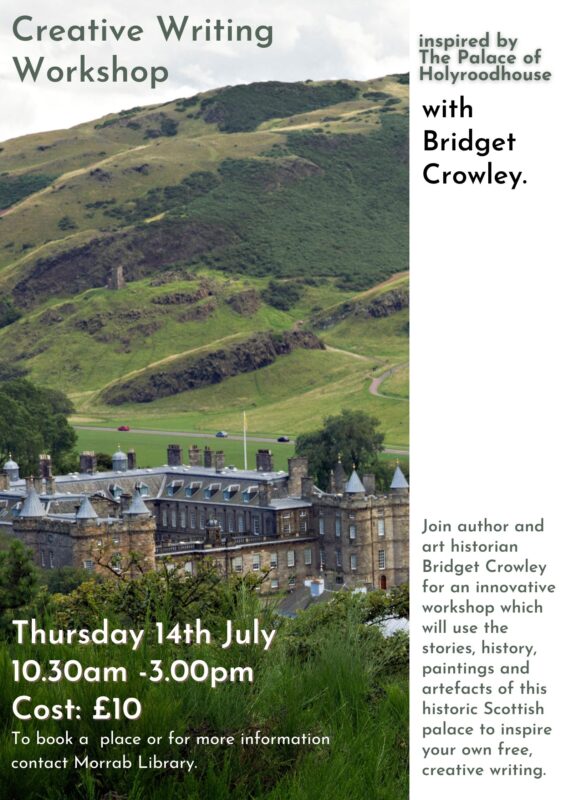 Join author and art historian Bridget Crowley for an innovative workshop which will use the stories, history, paintings and artefacts of this historic Scottish palace to inspire your own free, creative writing.

Bridget Crowley is an author and art historian, with a previous life in theatre. For many years, she has worked with students of all ages in the major national art galleries and museums, looking at images, artefacts and architecture as a source for creative writing. She recently finished a two-year stint at the National Gallery in London as one of a team of six authors writing the new accessible descriptions of the collection for their website. She also provided the text for audio-described tours for blind and partially sighted visitors to the Palace of Holyroodhouse and Westminster Abbey, and the introductory notes for such visits for the Tate St Ives website. Her four children’s books were published by Hodder, one of them nominated for the Edgar Allen Poe award in the USA.

The Palace of Holyroodhouse is Her Majesty the Queen’s official residence in Scotland. It stands under the shadow of Arthur’s Seat, the ancient extinct volcano which has seen the drama of the royal story in Edinburgh unfold over hundreds of years. Part magnificent palace and part dour fortress, Holyroodhouse tells the stories of the Stuarts and later British monarchs in its rooms, its art and artefacts. Bridget will use images of the palace to illustrate those stories and to give you impetus for your own free, creative writing. She may also give you a peep behind the scenes to give you an idea of what it’s like to work there today!

To book a place or for more information contact Morrab Library.