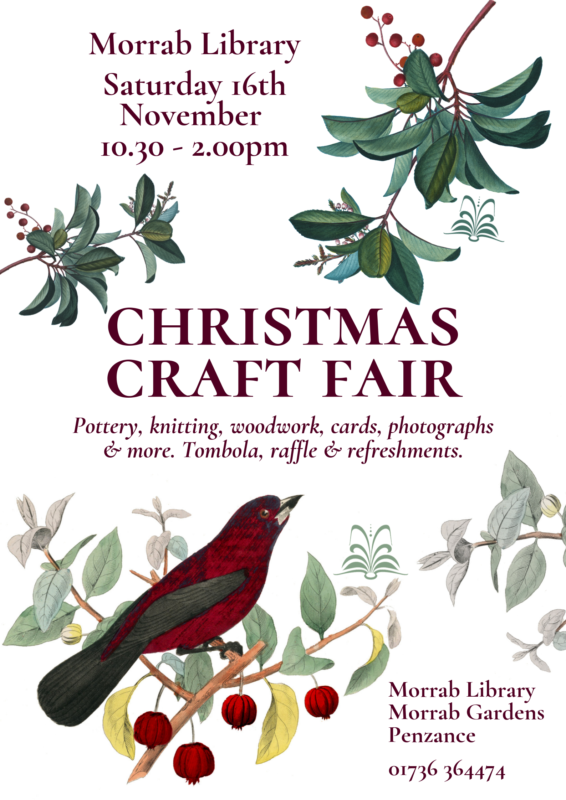 Join in the fun at our Summer Fete!

Start Golowan week off in style with a visit to the Morrab Library and enjoy our Summer Fete. There will be lots of local craft stalls, as well as our usual books and photographs for sale.

We’ll be offering all sorts of sweet and savoury delights in our refreshments room as well. And a chance to win in our Morrab raffle.

We look forward to seeing you there!

Book Review – Our Place: Can we save Britain’s wildlife before it is too late?

Our library member Katharine Mair has recently enjoyed this new addition to our library, and her review follows.

This is a timely book with a grim theme. It is also an easy and engaging read.  Mark Cocker is a working naturalist, who draws us into his own experience of delight in the living landscape that we share with other creatures.

In addition he gives us a lucid account of the work of  many individuals and organisations who have, over several centuries, worked to preserve threatened species and landscapes.This combination of personal anecdote and historical perspective tells us why we should be concerned, and highlights the many conflicts of interest that can get in the way of change, modern farming methods being just one example.

The title of this beautifully written book asks a question. To me it suggests the answer that we must never give up hope and stop trying.

Ho ho ho and a bottle of rum……Writers and Piracy 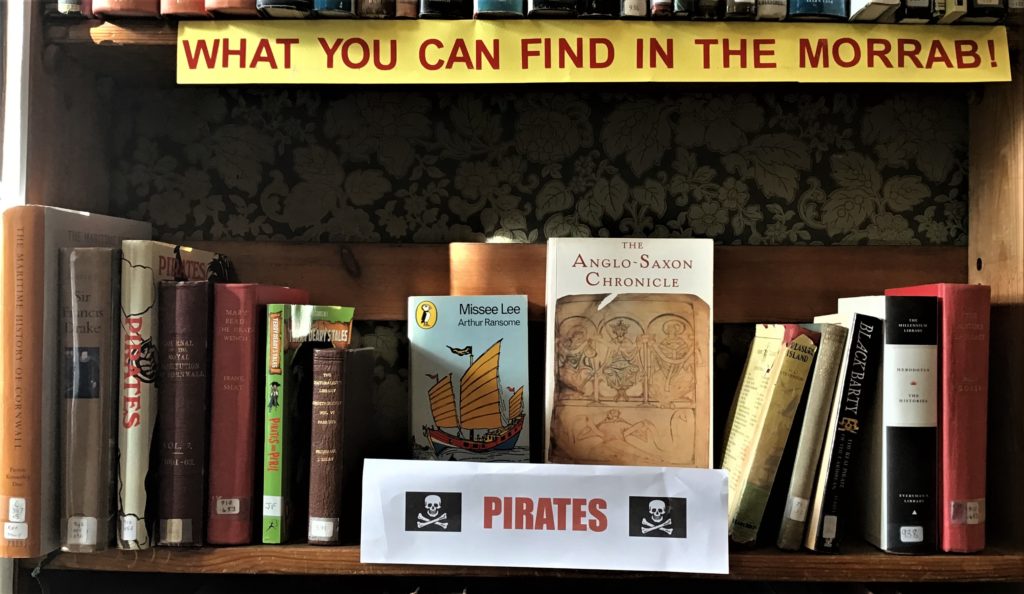 What you can find in the Morrab Library

If you go through the green baize door into the Reading Room at the Morrab Library, you will see in front of you a shelf with the title  “WHAT YOU CAN FIND IN THE MORRAB” The selection of books displayed will change approximately every month. It is intended to demonstrate the wide range of material that the Library holds.

This month’s theme is “Writers and Piracy”

Piracy is as old as history and as wide as the ocean. We have all heard of the pirates of the Caribbean, but what of the Barbary coast, the South China Sea, the Indian Ocean? Where there is water there is piracy. For some reason, pirates have been given a romantic image; they share it with highwaymen and some of the more colourful modern villains. That the reality was bloody, vicious and horrible has not put us off. These books show both sides of the story.

Treasure Island by Robert Louis Stevenson: Truly iconic, because it creates the image of the traditional pirate, wooden leg, eye patch, parrot on the shoulder, yo-ho-ho and a bottle of rum. Read it again, the true story is much darker and deserves its status as a classic.

Edward Lear’s Illustrations of the Family of the Psittacidae: Well, why not? Lear’s beautiful pictures of parrots are a joy. Any one of them would grace the shoulder of the blackest pirate.

Philip Gosse’s History of Piracy:  He of the son of the son of “Father and Son” and wrote a comprehensive history of piracy, dating from B.C. and covering the globe. A good place to start.

Pirates by David Mitchell.  One for the teenagers who want to buckle their swash.

Histories of Herodotus: This tells us of Dionysius the Phocean who started life as a soldier but got bored with peace and specialised in attacking Carthaginian shipping.

The Anglo-Saxon Chronicle:  Were the Vikings pirates? By a strict definition, no; piracy takes place on the high seas and between ships. The Vikings plundered isolated settlements such as monasteries, but their victims called them pirates, and they should know.

W.S.Gilbert’s Pirates of Penzance  Included purely for alliteration – our town is named only once in the libretto, but ah my foes and oh my friends, it gives a lovely light. Just think, it might have been Penge.

Frank Shay – Mary Read, the pirate wench: Women were pirates too. This is a fictionalised account of a true story of two ladies (Anne Bonney was the other) who were every bit as resourceful and bloodthirsty as their male colleagues.

Harry Kelsey – Sir Francis Drake, the Queen’s Pirate. Drake was a privateer, a licensed pirate in that he operated under letters of marque from the government. Thus entitled to seize enemy shipping, he tended to interpret the rules rather liberally, but this did not prevent him from making a major contribution to Queen Elizabeth’s treasury.

Philip Payton (ed.) – The Maritime History of Cornwall: For centuries the only practical way of getting to and from Cornwall was by sea; there were no roads to speak of, and coastal traffic was the county’s lifeline. The book tells how the lifeline was seriously threatened by pirates, from the North-West coast of Africa, the Barbary Coast. Cornwall’s home grown pirates were numerous and well protected by the community. This blog is too short to list them but Lady Mary Killigrew must represent them – spoiler alert- she got away with it.

Arthur Ramsome’s Missee Lee:  I make no apology for reintroducing my favourite fictional character. What better than a Cambridge educated female Chinese pirate with a penchant for Frank Cooper’s Oxford marmalade?! 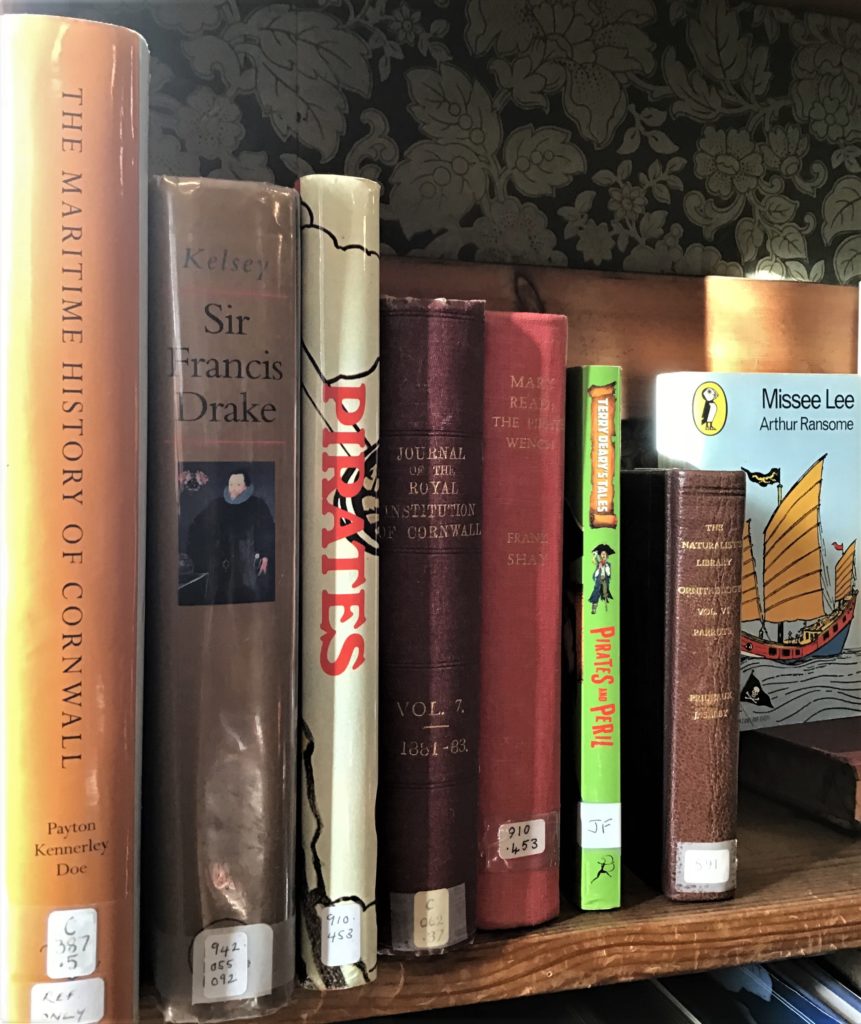